Water power (Hydropower) is power the is derived from the energy of pushing/falling water, which can be harnessed for useful purposes. Since the ancient times, hydropower has been the main source of power from water mills and has been used as a renewable source for irrigation and the operation of various mechanical devices, such as gristmills, sawmills, textile mills, trip hammers, dock cranes, domestic lifts, and ore mills. A trompe, which produces compressed air from falling water, is sometimes used to power other machinery at a distance. 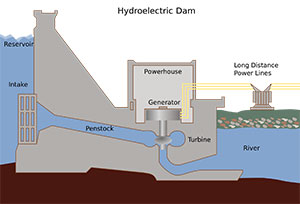 So how exactly do we generate electricity from water? Well hydroelectric power plants use water to power turbines deep within a dam to which the water flow from a higher side of the dam rushes down a water duct and through a propeller-like piece called a turbine, which then turns a metal shaft in an electric generator, which is the motor that produces electricity.

To get power from a damn you need a little help from gravity. The idea is to build a damn on a large river/lake that has a large drop in elevation, so on one side you have the water from the river/lake and on the other you have the drop. The dam stores lots of water behind it in the reservoir. Near the bottom of the dam wall there is the water intake. Gravity causes the water to fall through a penstock inside the dam. At the end of the penstock there is the turbine propeller, which is turned by the rushing water that is coming from the river. The shaft from the turbine goes up into the generator, which in return produces the power.

Hydropower is an extremely green way of producing electricity in mass as it doesn’t produce any waste product. Hydroelectricity doesn’t use the water, it simply harness the pushing power of the water to turn the turbines which are connected to the generator which in return creates electricity. The power from the dam can be created 24/7 indefinitely assuming that the body of water it is utilizing never runs dry. Once the power plant is in place they do not create any waste by-product in their conversion.

Like all power plants, hydroelectric power plants are extremely expensive to build, and must be build to the highest of standards due to the stress the structure will be put under. The high costs of a hydroelectric power plant means that the plant must operate for a long time before it becomes profitable. In the creating of building a dam it can also create the flooding of land, which means the environment and surrounding nature around the dam could be destroyed, including the natural habitat of animals, and even people. The creation of a dam in one location can cause controversy with neighbouring cities further down river that share the same water supply.

By continuing to use the site, you agree to the use of cookies. more information