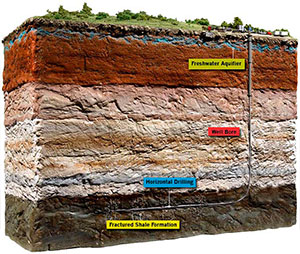 Natural gas is a fossil fuel that is formed when layers of decomposing plant and animal matter is fused together, the gas is formed when plants, animals and micro-organisms get compressed and super heated over thousands of years. The energy that was originally obtained from the sun through photosynthesis is stored in the form of chemical bonds within the natural gas it’s self.

Getting natural gas is a complicated process, it’s a industrial process designed to clean raw natural gas by separating out the impurities that are in the gas, along with various non-methane hydrocarbon and fluids to produce a quality natural gas.

The gas starts out underground among the shale rock where it is extracted using a system of drills and high pressure pumps known as fracking, which is a high pressure injection of fracking fluid which is a mixture of Water containing sand and other proppants suspended with the aid of a gelling agent. The liquid is injected into the ground anywhere from 2,500ft to 20,000ft where the liquid will crack and fracture the rock letting the natural out to where it is collected and to then be processed at a well head.

The processing of natural gas begins at the well head, where the composition of the raw natural gas extracted from producing wells depending on the type, depth and location of the underground deposit and the geology of the area. Oil and natural gas are often found together in the same reservoir underground so fracking for gas and oil can be done together. The natural gas produced from oil wells is generally classified as associated-dissolved, meaning that the natural gas is associated with or dissolved in crude oil.

Most of the natural gas that is extracted from earth contains varying degrees of low molecular weight hydrocarbon compounds which could include methane (CH4), ethane (C2H6), propane (C3H8) and butane (C4H10).

By purifying the natural gas we are able to remove contaminants such as water, carbon dioxide (CO2) and hydrogen sulfide.

By continuing to use the site, you agree to the use of cookies. more information